Uncle Bert Takes a Girl to the Movies, circa 1916 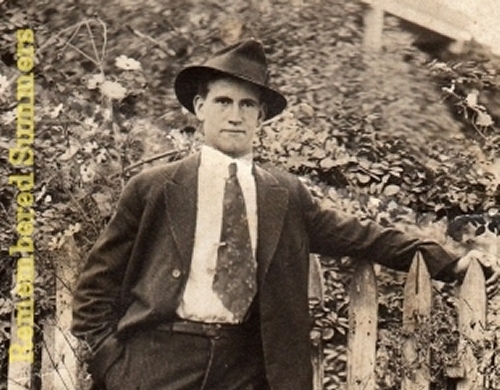 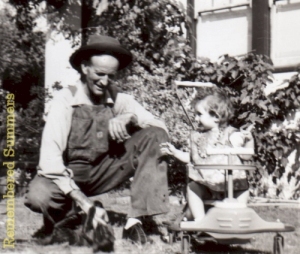 Uncle Bert was a fixture of my early life. The second oldest of my father’s seven brothers, he lived in a shed behind his mother’s house when I was a baby – just across the street from us. He was a carpenter. He built my swing (and my first two-wheeled bicycle), and he gave me one of the best presents I ever got: a miniature carpenter’s chest, with a real (but child-sized) saw, a real hammer, and a real plane, with a sharp blade that let me shave off long, golden curls of wood, just like my father did. He also kept me supplied with scrap lumber, which I nailed into tugboats and other – probably unrecognizable – shapes. Both my father and Uncle Bert made the unusual assumption, for men born around 1900, that a little girl was just as likely to want to build things as a little boy was. And they were right.

World War II and After

Uncle Bert spent WW II in Hawaii doing military construction work; I don’t know if he arrived before or after Pearl Harbor. In this picture, he is flanked by his two brothers in the navy. Bob was a SeaBee (CB). Bert is smoking a cigarette, but later switched to a pipe. Bert definitely cultivated a Popeye-the-Sailor look. 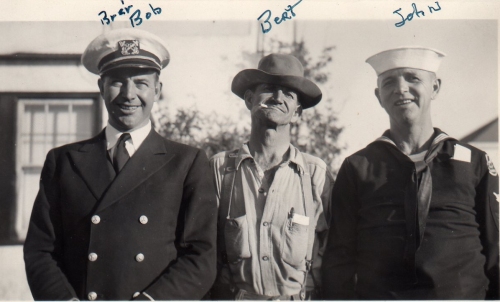 Bert flanked by two of his younger brothers

By the time I was in high school, Uncle Bert had moved to a warm berth – with a bathroom – in our basement. He was by that time severely disabled by arthritis that turned his skillful carpenter’s hands into rigid claws with gigantic knuckles. His fingers were bent under his palms and frozen into position, but he could move his thumbs enough to use a fork or spoon and to fill and light his pipe. There was usually a bag of tobacco in his shirt pocket.

He also had something in common with Garrison Keillor’s Norwegian bachelor farmers: Uncle Bert put on his long underwear in the fall and didn’t believe in taking it off until spring. At all. He was shy and physically modest, and he held to the old idea that taking a bath in the winter would “open the pores” and let diseases in. I suspect that he was also afraid that someone would suddenly enter the bathroom as a prank while he was in the tub. (He did grow up with seven brothers….) In addition to his bath-aversion, he was fond of Limburger cheese, liverwurst sandwiches, and raw onions – he kept a huge barrel of onions in the basement. I got to sit next to him at dinner all through high school.

I loved him when I was two, and I still loved him – but I was always grateful when my stepmother laid down the law: If he wanted to eat the food she cooked, he had to bathe occasionally. 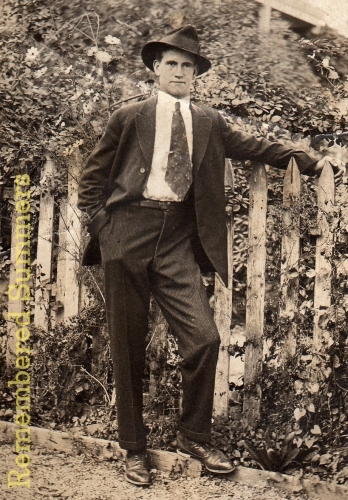 When I showed Uncle Bert this picture, taken around 1915,  he remembered the shy and awkward boy he had been, and told me this story:

(Uncle Bert knew a lot about hard work and poverty. His father – what was called “a hard man” — yanked him out of school as soon as he was big enough to be useful on the construction crew and paid him 50 cents a week, year after year. “Fifty cents a week!” my uncle said bitterly, sixty years later.) 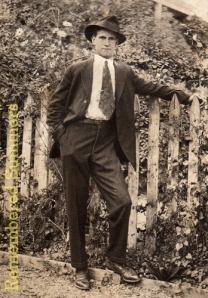 Bert — “Sweet Sixteen” is written on the back

Young Bert decided to spend some of his hard-earned wages on a trip to the movies (silents, of course) with a group of kids his age, boys and girls who had grown up together. And he decided to treat the hard-worked girl next door to her first movie. He went over to her house the day before to ask permission of her Maw, who was, as usual, sitting on the porch in the wooden rocking chair, chewing and spitting. Amazingly, she said her daughter could go with the group.

Picture the boy in this photograph, shy and diffident, approaching her house the next evening to collect the girl. Maw was waiting for him in the rocker: Rock – Rock – Splat!

But this time she had a shotgun across her lap.

She gave him a long, steely-eyed look, and said, “Iffen anythin’ happen to my daughter – Splat! – Ah’ll shoot you like a dawg.”

No wonder Bert was shy around women.