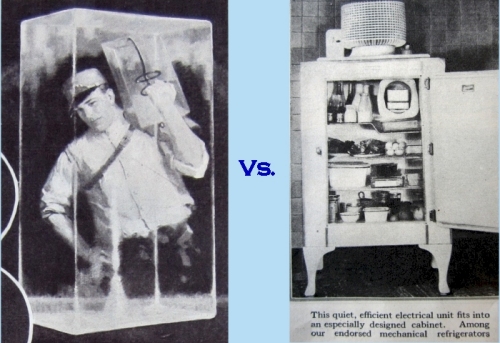 The story that follows came from my father. I’m not sure when it happened, but late 1920s or early 1930s seems likely. If – IF –it happened as he said….

By the time I was born, my Aunt Dorothy wasn’t speaking to either of her brothers.  She didn’t approve of the woman my Uncle Mel had married – although (or perhaps because) both women worked for the same company and sometimes sat across the desk from each other. And, after the Icebox Battle, she wasn’t speaking to her brother Harris, either.

Harris, her elder brother, was married and had two children whom she adored.

In fact, the Icebox incident that ended so badly took place at a family gathering at his house.

Harris was married to my Aunt Gertrude, who had sailed to America from Finland (according to family legend) after just missing the Titanic and switching to a different ship. 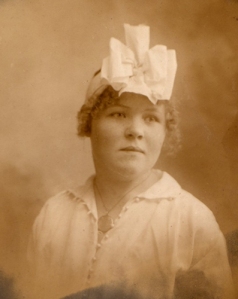 My Aunt Gertrude once saved me from a terrible accident while I was staying at her house. After playing outside on a cold winter day, I came into the kitchen where she was cooking dinner, and stood with my back to the stove to warm up. The gas burner set one of my braids on fire. Gertrude leaped out of her chair and clapped both of her bare hands over my flaming hair, so fast that I had no time to be frightened or hurt. Of course, we had to cut both braids short to make tham match, so there was no hiding the accident from my mother…. But I enjoyed that visit; Gertrude was a skilled weaver, and, as she worked on a large linen tablecloth, I could hear the “thump, THUMP!” all the way out in the back yard.

Their house had a living room that opened into the dining room through a wide archway. I think I remember that the sofa was placed a few feet in front of that opening. There was plenty of room to walk around either end. When no formal dinners were planned, Gertrude set up her loom in the dining room, which was the only room big enough to hold it.

But on the night of the Icebox Battle, the dining room was being used for a dinner party, with Harris and Gertrude, Dorothy and her husband, my mother and father, and possibly my grandmother and a great aunt or two.

Like my mother and father, Dorothy and her husband both had jobs. They were childless; Dorothy was married to a career Army man, and they lived on the Presidio, in officer’s housing. So Dorothy had more disposable income than her brother and his wife, and she could afford to be “modern.”That night she made the mistake of bragging that she had just bought an electric refrigerator. She was going on about the convenience of not having to empty the ice-melt pan every day, and not having to have blocks of ice delivered regularly by the iceman – when silence fell.

Dorothy had forgotten that her uncle owned the Redwood City Ice House, that both of her brothers had been icemen, and that Harris still worked there. The dinner she had just eaten was paid for by his Ice House job.

Dorothy was small, but she had a temper. So did Gertrude, who asked how dared she buy a refrigerator! Didn’t she realize she was “taking food out of the mouths of her brother’s children? What if everybody got rid of their icebox and stopped buying ice?”

Dorothy said times were changing, and you had to keep up with progress. She may have added something about old-fashioned people from Finland….

Gertrude said – well, I don’t know what she said, but one of my aunts got her face slapped, and got her own face slapped in return. I’m not sure which of my aunts threw the first punch. One of my aunts gave her sister-in-law a black eye, after which, according to my father, the hostess landed a return punch that sent Dorothy flying right over the back of the sofa, “ass over teakettle!” (I’m quoting. My father rarely used that kind of language in front of me, so it was memorable.)

Poor Uncle Harris. He hadn’t had a chance to say a word, but somehow Dorothy decided it was all his fault.

NOTE: As I said at the beginning, this story was my father’s explanation of the start of a family feud. However, Dorothy did love her niece and nephew, and this photo from the late 1930s shows them all gathered around the table, with Harris sitting at the head, Gertrude standing behind him, and Dorothy at the far left of photo.

Did they make up temporarily for the sake of the children? Or, if this was the disastrous dinner, then Dorothy waited till 1937 or ’38 to buy a refrigerator. The “handwriting on the wall” of the Ice House  – its approaching fate – should have been pretty visible by then!