Fourth of July Parade and Rodeo, Long Ago in Redwood City

Around 1950, when I was very young, the Redwood City Fourth of July Parade and Rodeo was a very big deal. For one thing, the rodeo and carnival, where we went on rides, won bowls full of guppies or live baby ducks, ate corn dogs and cotton candy, and occasionally escaped the ever-watchful eyes of our parents, were the highlight of every summer.

For another, the parade floats were not designed by professional float designers and covered with exotic flowers and seeds that we had never heard of. The floats were thought up and built by their sponsors, often fraternal organizations or small businesses.

Redwood City had plenty of benevolent and fraternal organizations:  the Lions, the Elks, the Moose, the Foresters, the Masonic Groups, and the Odd Fellows are just the ones I remember.

Float built by Redwood City Foresters of America branch, around 1948 or 1949.

I can date this float, loosely, because I am the little girl in the center, wearing cowboy boots. The young woman behind me was a local beauty queen. This float used rolls and rolls of aluminum foil — which was very “modern” and was no longer needed for the war effort. 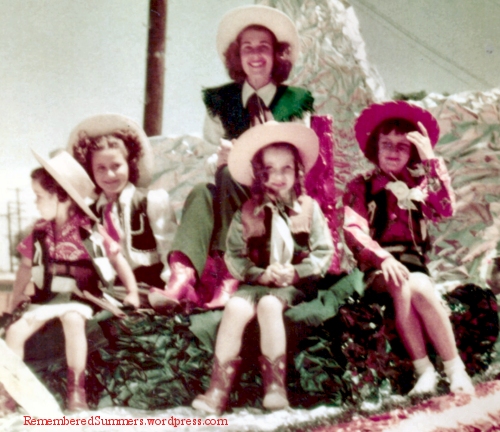 “Cowgirls” riding on the Foresters’ float. Redwood City, around 1949.

There were marching bands (the sound of bass drums thrillingly vibrating in my stomach as they passed.) There were baton twirlers and platoons of horses. The Sheriff’s posse rode, and so did many private citizens who dressed in Old California finery and decked their palomino horses in silver-encrusted saddles. Veterans marched, including some survivors of World War I, and the two or three day rodeo meant that the entire Independence Day weekend had a western flavor. My parents always dressed up in cowboy clothes. My father wore a black ten gallon hat, like the ones seen in 1930’s western movies. Here’s one worn by Tom Mix.

My father was a Forester, and enjoyed helping to build floats like this one: 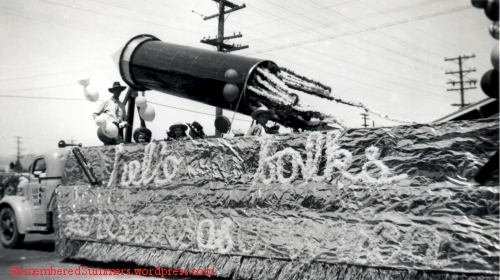 A rocket — or a firecracker — blasting off on a float made by the Foresters. Early 1950s.

That’s my father, in his black ten gallon hat; he was very proud of this float, because every once in a while the rocket emitted a mighty roar and a cloud of icy smoke. There was a fire extinguisher inside the rocket. I got to ride on this float, too. 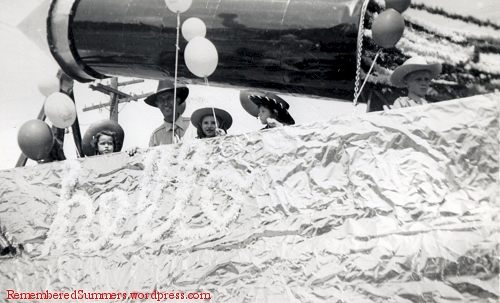 The rocket, fueled by a fire extinguisher, sounded very loud when you were riding next to it.

There was no problem finding little girls and boys who had cowboy outfits. These were the years of tiny black and white TV sets where we watched The Lone Ranger and Tonto, Roy Rogers (and his horse, Trigger,) Hopalong Cassidy (and his horse,  Topper,) Red Ryder and Little Beaver, and The Cisco Kid and his sidekick, Pancho. Those of us who didn’t have TV sets could read about their adventures in the Sunday Comics (The Lone Ranger ) or listen to them on the radio.

“Buckaroos” costumes made from McCall sewing patterns, McCall catalog, May 1950.

Here’s another look at the Foresters’ float with the big silver star and a group of “Rodeo Queens:”

Here, it is passing the Hull Brothers Hardware store and the Luxor Taxi Cab offices. 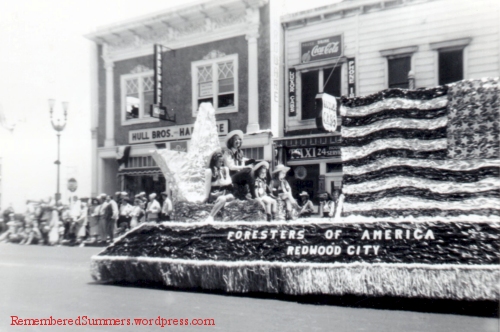 For a horse-crazy little girl like me, the morning of July 4th had a special aroma. The parade used to form up in the streets north of Broadway and follow a parade route up Arguello Street, turning East onto Broadway. Our house was on Hopkins near Arguello, and the horse and rider groups often parked their horse trailers along our street. My father always filled two big galvanized tubs with fresh water for the horses and put them on the curb in front of our house. After the horses had been there for a glorious hour or so, my Grandma B. and my Great Aunt Alice (two dignified ladies in their seventies) would appear with cardboard boxes and brooms. They swore there was nothing like horse manure for growing roses.

May your Fourth of July memories be as happy as mine. 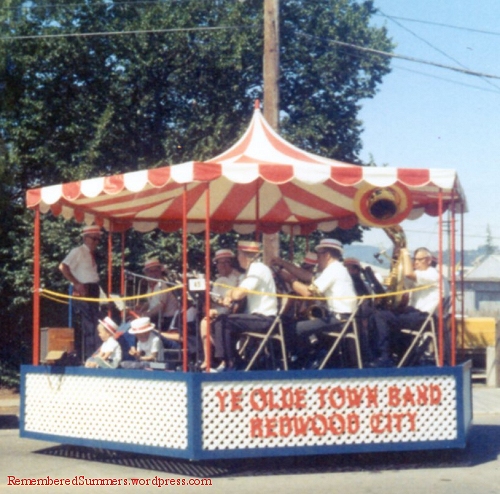 4 responses to “Fourth of July Parade and Rodeo, Long Ago in Redwood City”